The 'Wood Basket' of Arkansas 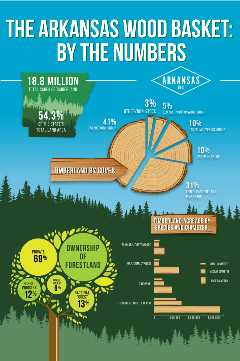 Surging economic development and dozens of new jobs are coming to the state of Arkansas because of the influx of companies seeking to take advantage of the state’s diverse “wood basket.” The term is often used to describe the southern region of Arkansas where the state’s timberland forest covers 18.8 million acres, or roughly half of the total area of the state. This is having a huge impact on the state’s economy, timber and paper products companies from around the world, and the lives of the many families living in the area who are seeing an increase in jobs created by those companies.

Although there have been major increases in demand for timber, water, outdoor recreation and other forest values over time, timberland forest still covers 56 percent of the state – more than all other land uses combined.  According to Arkansas Forestry Association, hardwood forest and hardwood-pine mixed forest make up the majority of total forest area. Oak and hickory forest make up 41 percent of the land area, and 31 percent is made up of loblolly and shortleaf pine.

A History of Growth and Sustainability in Timber

As a result of the state’s abundance of timber and other natural resources, its ever-growing skilled workforce, and the major interstate highways, railroads and navigable rivers for product transportation, companies are realizing the benefits of basing their business in Arkansas’s wood basket. The other important factor for companies is sustainability. Arkansas has an impressive track record when it comes to maintaining its timber resources. With an average growth rate of 1.6 trees per tree harvested, the state has one of North America’s most sustainable timber supplies of pine, oak and other hardwoods.

Despite a 72 percent increase since the early 1950s in the total timber harvest, as of 1995, yearly growth was 25 percent or more greater than yearly harvest for both pine and hardwood categories.

Many factors contributed to the recovery of the Arkansas forest since the end of the pre-forestry exploitation era and its continuing sustainability through the years in spite of greater demands placed on it. Fire protection became more effective in the mid-1990s. Annual loss to wildfires have been reduced to only 32,000 acres – two-tenths of 1 percent of the total forest compared to 11 percent in 1929.

A second factor has been large-scale investment in tree planting which now totals 119,000 acres per year as well as other professional forest management measures to improve timber productivity, wildlife habitat and population balance, watershed protection and overall forest health. A third was the virtual elimination of waste in logging. This was accomplished through the development of tree-length logging and hauling equipment–and of debarking and chipping systems–to turn saw milling waste into chips for pulp and paper manufacture.

The growth of the timber industry in Arkansas isn’t showing any signs of slowing down. Arkansas recently signed incentive agreements with several domestic leaders such as Georgia-Pacific and Kimberly-Clark, as well as China’s Sun Paper and Canada’s Conifex Timber, Inc., to improve existing industrial sites or launch new operations in the state.