In South Arkansas, workers are helping to produce vital components for the aerospace and defense industry, safeguarding freedom around the world.

The epicenter for aerospace and defense manufacturing in Arkansas is the Highland Industrial Park in East Camden.

Established in the early 1960s, the Highland Industrial Park is located in the former Shumaker Naval Ammunition Depot and is spread across 18,780 acres with 5,408,686 square feet of industrial and warehousing space. The naval depot was closed in the late 1950s, and the industrial park was founded to take advantage of the existing infrastructure. “The state leadership and local groups put together this idea to have the defense industry here, and now it’s one of the best defense industry industrial parks in the U.S.,” Highland Parks Industrial Park President John Schaffitzel said. 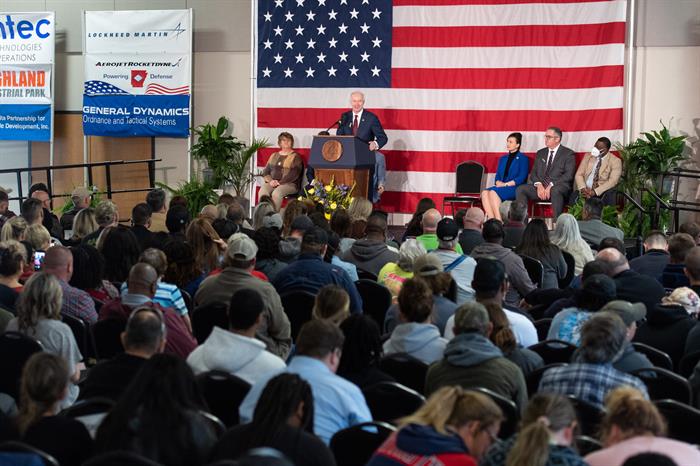 Recently, the Arkansas aerospace and defense industry at the Highland Industrial Park was spotlighted for its global impact.

On March 14, 2022, Gov. Asa Hutchinson and Secretary of Commerce Mike Preston, along with local officials, visited Southern Arkansas University Tech to thank the aerospace and defense industry workers in Camden and East Camden.

More recently, aerospace and defense workers in Camden have helped produce components that power weapon systems that have been used in Ukraine to fight the Russian invasion. Both General Dynamics and Aerojet Rocketdyne manufacture key components of the Javelin anti-tank weapon that has been used by Ukrainian soldiers during the war.

“Your daily commitment to producing state-of-the-art and highly technical components and propulsion systems has made the difference for Ukraine,” Gov. Asa Hutchinson said. “Because of your work, Ukraine has surprised its invaders by a strong defense against the onslaught of a cruel invasion. Camden is in a critical front-line position to support the Ukrainians who are stopping the Russian army from overrunning their nation.”

Secretary of Commerce Mike Preston stressed the importance of the industry workforce, saying that the south Arkansas workers are making the state’s aerospace and defense industry strong.

“You all are what makes this community so strong, and ultimately makes Arkansas so strong, in our workforce. We’ve been honored over the last seven years to promote Arkansas all over the world. A lot of times when we go all over the world to talk about Arkansas, the thing that we’re focusing on in is our aerodefense industry. Whether it be at the Paris Air Show or the Farnborough Air Show or somewhere around the world, we brag about the workforce that we have right here in south Arkansas and the work that is being done,” Preston said.  “None of this is possible without a strong workforce. Everyone in this room who makes up that workforce, who makes that supply chain, and supports this community, I simply say, ‘Thank you.’ Thank you for what you’ve done and what you continue to do.”

Workers in Camden, Arkansas are playing a crucial role in the effort to protect freedom in the United States and around the world. Subscribe to our Podcast
RELATED BLOGS:
Aerospace and Aviation Soar in Arkansas
Dillard’s Executive Makes the Business Case for Arkansas
Steel Industry Heats Up in Arkansas