The State of Aerospace and Defense in Arkansas

Arkansas manufacturers can expect aerospace production to proliferate this year — and into the foreseeable future — thanks in large part to a record-high backlog in commercial aircraft orders. The same could be said for the state’s robust defense industry, as countries, including the United States, ramp up defense spending due to “heightened global tensions and geopolitical risks.”[1]

The state — which boasts aerospace and aviation as its No. 1 export — is well-positioned to take on the industry’s growth. Among the reasons why are:

The Catalysts Behind the Industry Growth

In the aerospace sector, industry profits rebounded in 2010, beginning an upward secular trend. The main drivers behind the increases are consolidation, revenue passenger kilometer and airline capacity discipline, along with low fuel prices and more revenue sources, according to Deloitte.[3] 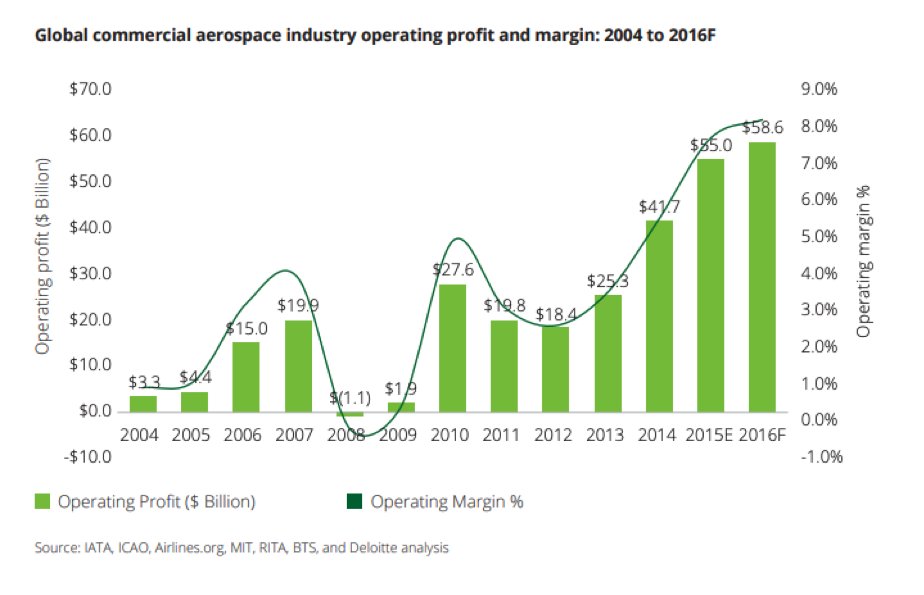 There’s still room to grow, as most flights operated at load factors that were at an all-time high (80.6 percent in 2015).

All of these factors have allowed global airlines, many looking to replace old and obsolete equipment, to demand newer, fuel-efficient aircraft. In fact, the order backlog has reached new heights: there are currently more than 14,000 unfilled orders, up more than 445 percent from 2004.

Original equipment manufacturers have experienced order backlogs since even before 1998, but there’s now a “new normal” when it comes to the wait time. What used to be a two to five year wait has extended to six to 10, according to Deloitte analysts. That, in part, is due to the fact that more original equipment manufacturers have come on board, expanding the number of aircraft customers to 233 in 2015, and to the diversification of orders with most increases in orders coming from the Asia-Pacific region. Take a look at the chart below to see the changes in the airline industry and the order backlog. 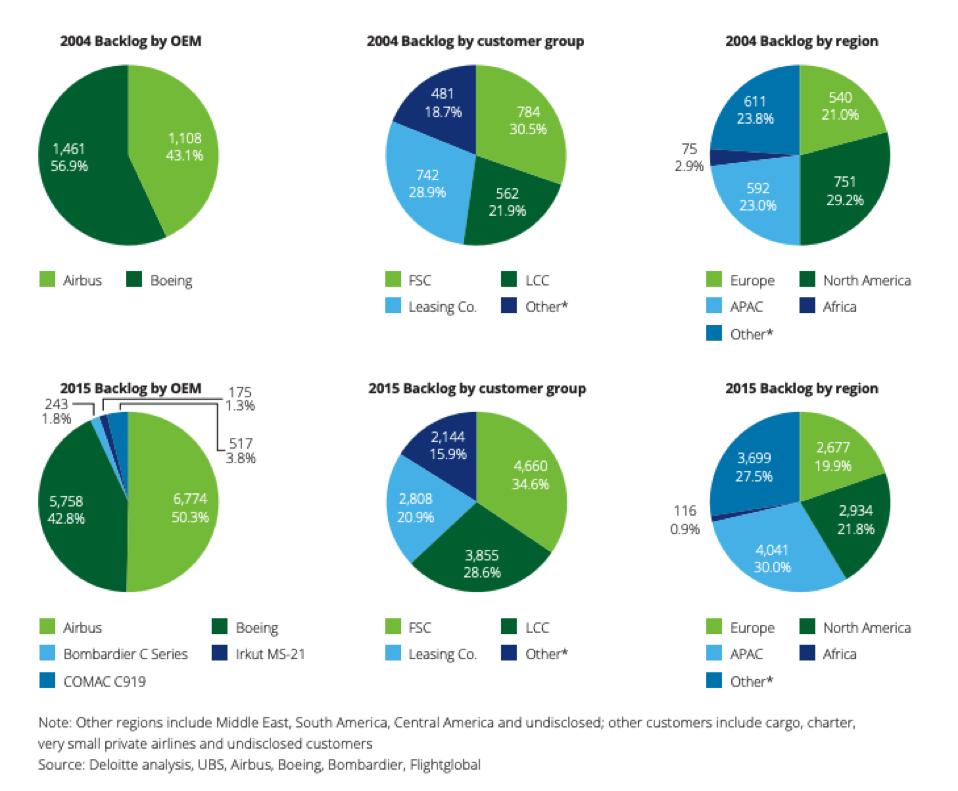 In 2016, Deloitte further broke down the details behind the order backlog, finding:

In the defense sector, global spending increased 3.9 percent to $361.5 billion from 2016 to 2017.[4] The growth can largely be attributed to additional federal funding for the U.S. Department of Defense, one of the industry’s largest customers.

Defense budgets are unlikely to slow down as the current administration has prioritized strengthening the military, positioning the armed forces well against potential threats from North Korea, Russia and the Middle East. Those threats are expected to boost demand for defense equipment in the coming years.

To fully seize the economic opportunities, aerospace manufacturers should fortify the supply chain and look to advanced technologies to help increase production rates. The climbing demand may also add competition to production, though, in the short term, current manufacturers need not worry as newcomers would face regulatory and industry obstacles before becoming actual contenders.

Defense manufacturers must also remain cognizant that physical harm is no longer the only type of threat. In today’s digital age, countries are now shielding themselves from cyberattacks that are growing in size, frequency and sophistication. Countries, too, are looking abroad — to space, that is — as a new ecosystem in which their assets must be protected.

Both sectors will also want to keep a close watch on international trade agreements, particularly those on which manufacturers rely, such as steel and aluminum. Should foreign countries choose to tax these key raw materials, it will cut into manufacturers’ bottom lines, curbing profitability from an otherwise upward-trending market.

The aerospace and defense industry currently makes up more than one quarter of the state’s total exports and just over 1 percent of the nation’s.[5] To keep pace with the demand influx, Arkansas is committed to driving more of its residents to train and work in these sectors, providing companies a continuous flow of skilled workers and ensuring our residents a superior quality of life.

From the start, aerospace and defense companies that are now located in the state have relished in the low cost of doing business. And, while it’s not the sole reason they’ve found business success, it has played a role in where they’ve decided to invest and grow operations — here in Arkansas.